We found out Thursday that General Wesley Clark would be in Oklahoma City on Saturday.
I learned this from an e-mail from Alfalfa Bill, so I contacted him and asked if we could get seats for sure,
because I thought we might drive all the way there to discover the place was already sold out.

Turns out Alfalfa Bill was one of the organizers of the event. Apparently he was aware
of  bartcpop.com,  and he said he could get us front row tickets to the event.

So we hopped in (we didn't hop) Mrs. Bart's aging touring sedan, (a 1992 model) and drove to OKC.
The General was speaking at a VFW Hall on Penn Avenue. I knew Penn Avenue was a big street, because
the Penn Square bank went bankrupt during the crooked Reagan administration and caused a big stir.

When we got there, I was surprised to find there was no admission fee.  I asked the lady at the desk to point me
towards Alfalfa Bill and he turned out to be a cool cat.  I found out then he was THE man, not just one of the organizers.
True to his word, he put us in the front row, and he even managed to get us seats with our backs to the camera, thereby
preventing by political enemies from a possible assassination attempt.  The area we sat in was a little larger than an average
living room, adjacent to another room with two hundred seats that were still good seats.

Sidebar:
I met a very nice lady but I cannot remember her name. She is a fan of the page and asked Alfalfa Bill if he
would introduce us and it was fun meeting her. I felt extra good about meeting her when it turned out she
had the best question of the day for the General.

Next up - the MC introduced Wesley Clark.
He walked into the room like a general would - full of confidence and wearing a big smile.
He shook the hands of everyone in the front rows, including Mrs. Bart and myself.
I felt like I was shaking a president's hand.

Sidebar:
One woman said, "You're going to be on Hardball with Chris Matthews real soon.
Please don't let him push you around."

The General kinda smiled and said, "We'll be in the same room. He won't push me around."

That's what I want to hear from a Democrat.
Years ago, waaay back in the back issues, I did a thing about being on Meet the Press.
And if Tim the Whore started in with me like he does with most Democrats, and don't for a second
think this is about me being some kinda of tough guy, but if that cock-happy bastard asked those leering,
leading smug-ass questions about my sex life, I'd come over that desk and pop his ass.

...it's like in football when the defense jumps offsides, and the offense gets a free play...

If Chris the Screamer starts into Clark with his patented cock and nipple questions,
I look for The General  to smack his Poppin' Fresh ass once for free!

When a prick like Tweety starts cock-hunting, you just give him a pop knot upside his balding head
and after 6-8 of those, the former Democrat might actually learn something from the experience.

Unlike most candidates (this is just a guess) he only spoke for 15 minutes or so and then turned
to the audience for their questions for the remainder of the ninety minutes he spent in the hell hole K-Drag.

He took about 25 questions on pretty much every issue you could think of.
Like Clinton, (can't say that about many people) he answered each question with Democratic vigor.
He didn't blurt out the stale and mindless platitudes like the unelected moron.

I recorded the short speech, and the questions and Clark's answers, but that seems more like a job
for BartCop Radio. He did have some funny stuff, which surprised me a little bit. At one point,
he started to lose his voice so he reached behind him and took a swig of his bottled water.


After the session, he was BIG-time mobbed by people wanting pictures and autographs, etc. 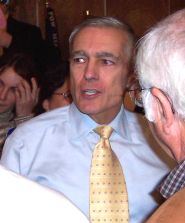 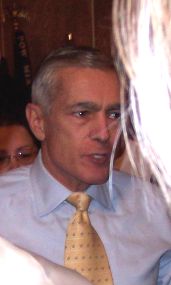 Seizing the opportunity, I found Mrs. Clark and handed her a bartcop.com  business card.
Because I'm one of the leading morons in Oklahoma, I forgot the bag of  bartcop.com  stickers
that I planned to bring, so a card from my wallet was the best I could do.

Next, I approached a man with the Clark campaign we called "Hair Boy."
(That's not a sign of disrespect, we just had to assign him a name and that worked for us.)
His hair reminded me of a young David Lynch.
So I  handed him a  bartcop.com  business card and he looked at me and said,
"You're BartCop?"

He had seen the page, and I felt really good that someone of Clark's staff had seen it.
I found another Clark staffer and gave him a card, but he wasn't familiar with the Treehouse.

Around this time, Alfalfa Bill waved to me ans asked if we'd like to have our picture taken
with the possible next president of the United States and we said, "Damn right we would."
Bill said something to Hairboy about Bart being someone the General should have his
picture taken with, and just hearing that made me glad we went.

So we waited outside in the gorgeous Oklahoma sunshine for a few minutes. 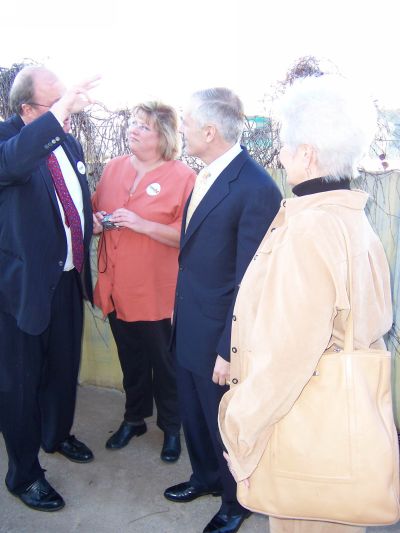 
Next thing I knew, the General walked up to me and put his arm around my shoulder
and another arm around the shoulder of the guy to my right and someone took a picture.

The couple who took the picture hadn't ever heard of a BartCop before.
They asked me what I did for a living, and I still haven't figured that out yet, so I said "I'm a comedian."
They asked if being a comedian paid well and I just smiled and said, "No."
I got the fella's card, (He's a lawyer!) so maybe I'll get that picture someday.

Then the General and his wife got in a Buick and was driven to the airport for an appearance in Carolina. 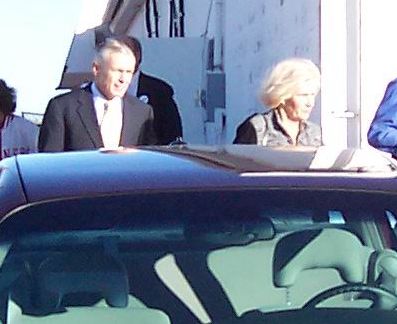 One last thing, and this isn't meant to piss off the Dean supporters and the Kerry supporters, but if you
agree with me (you kinda have to) that Bush will run his 2004 campaign as the candidate who can best get
the military to protect us, how can you not say Clark is the best man to counter that clumsy Bush lie?

I like Dean - I even sent him some money, but we're going to have some helps-Bush terrorist attacks
between now and the election and people will be scared and they're going to vote for their safety and
the B.F.E.E. will paint Dean as a deranged northeast liberal with a temper and they can't do that to Clark.

Plus, it'll be hard for Bush's good puppy press to say Clark doesn't know foreign affairs and Clark
might even win a lot of votes from the military and gun owners, two groups that dissed Gore in 2000.

I've always said I would support the Democrat who has the best shot at beating Bush.
The object is to lose Bush, not win the election for any particular Democrat.

Can I get a "Hell, yeah!" for a Clark-Dean ticket?

The General had a very successful trip to Oklahoma, but what did Oklahoma's whore media want to talk about?

Clark's "involvement" in burning up poor David Koresh, and this is years after John Danforth said it was
"a 100 percent certainty" that the government did not start that fire. It was started by the martyr Koresh,
whom the GOP idolizes as "an armed tax resistor," which is downright unAmerican.

Clark's answer was a good one. He said he got a call from a higher up (he used different words) and
was ordered to give the FBI a tank and an armored personal carrier, so he followed his orders.

...but now they want to pretend Wesley ran inside the Koresh compound with a can of gas
so he could burn the innocent little children - because that's what Democrats believe in.