The four-day train trip began in Washington DC at 5:20pm Thursday, and ended
in San Diego, CA late Sunday morning. On the train you get to see the countryside
from a perspective not afforded by any other mode of transportation. You get to meet
many different people and conversation comes easy.

"Where ya from?" "Where ya headed?" "Business?" "Family?" Like in military unit,
we all tell our stories and your point of origin becomes your moniker:
"Hey Houston, 'nother beer?" At mealtime, you sit where they tell you,
so every meal you are with new people. Here's my diary:

Ridin' on the City of New Orleans

The Capital Limited actually. It's early Friday morning, rolling through
rural Ohio. The big panoramic windows reveal pieces of a world us
cosmopolitan Southern Californians rarely see. A layer of frost dusts the
ground, cars and roofs. Steam rises from piles of what appear to be chopped
corn stalks. Changing leaves paint the trackside trees from a palette of
red, gold, and yellow. The sun breaks over the eastern horizon and whatever
perfectly Norman Rockwell little town we just blasted through is waking up.

Cornfields grace the landscape as far as I can see in any direction
punctuated by the occasional cluster of farmhouse, outbuildings and silos.
I'm reminded of Dan Quayle's rural America/ real America pun.

Yesterday I left DC. Standing in Union Station at the ATM machine a few
minutes before my train boarded, I heard a familiar voice. "It can't be" I
thought. I spun around and after doing a perfectly cartoonish double-take,
there he was, Jesus Christ himself! In the flesh! I walked over, sweat already
beading up on my brow. I summoned all my courage and addressed Him in
the most respectful manner I could muster, "Mister Carville! Sir!  Please, I
need to shake your hand." He was rushing to catch his train which was already
in final boarding call, but he took a moment to shake hands and listen to me
blubber about what a great fan I am. Unfortunately I had already packed my
camera away and there was no time for a picture anyway.

I came away from DC having met Alan Dershowitz, gone drinking with
Michael Newdow, hugged Helen Thomas, and shook hands with James
Carville. My life is complete.

South Bend, IN. The streets are all but empty. There are abandoned factories
and boarded-up houses everywhere. The parking lot of the Bendix plant is
full, but there isn't any activity I can see. It looks like one of those after the
nuclear holocaust/devastating disease movies, but this is real.

The faded sign on the side of the big boarded-up beige brick building says
"Hardware". This is NAFTA's heartland; the Rust Belt is a depressing place.

Chicago. The steward suggested I use the 3-hour layover to go have lunch at
a place called "Signatures" on the 95th floor of the John Hancock building. 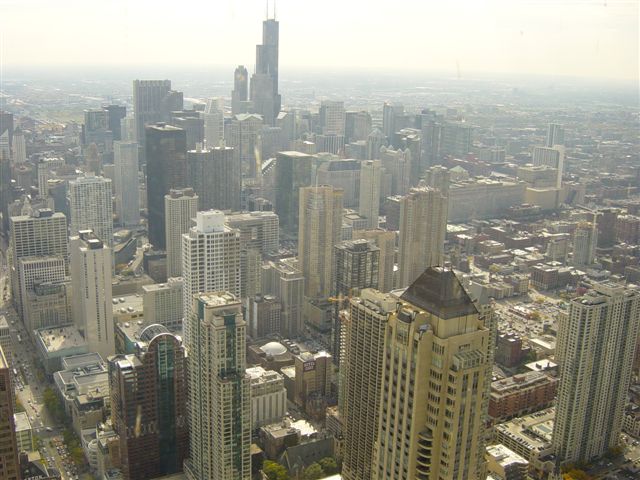 Wow! What a view!! Almost 1000 feet in the air overlooking downtown Chicago.
When the hostess took me to my table, it wasn't ready so I had to wait about
another ten minutes. BFD--sometimes feces occurs and they were very busy.
But when I was finished with my meal, I discovered it was complimentary
because they made a ten minute mistake. I tipped the server the amount the
lunch would have cost.

Just crossed the Mississippi at sunset. Stunningly beautiful, but a bit too
dark to grab a shot with my camera in its default mode and not enough time
at 50 or 60 mph to reset anything.

I have yet to talk with anyone who supports the war, thinks Bush should remain
in office or for that matter even admits to voting for him. Okay there were a couple
of thoroughly inebriated ex-Marine-been-working-at-the-Pentagon-for-25-years
types in the hotel bar who bought me a couple beers when the subject turned to my
prior military service. But even they were not real pleased with the current leadership,
and kind of alluded to the idea that criticism could jeopardize their employment.

Had dinner last night with a man who works for FEMA. He was quite bitter
about the tax cuts. He spoke a lot about how the cutbacks are affecting him
and the organization's ability to meet its mandate. 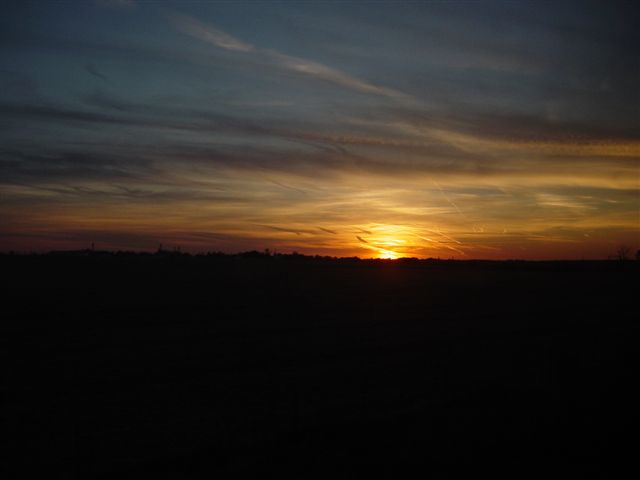 Saturday, just after midnight; Topeka, KS. Amtrak seems to have become the
last resort for people who are too large to fly. A woman just boarded in KC
and moved in across the hall from me. She literally has to walk the passageway
sideways. Fact is things aren't much bigger than on an airliner. You just have a
place to lay down, and anyone comfortable in the top bunk probably has some
experience aboard a warship. I bring this up because at the very moment I saw
that woman, I was reading an article in the newspaper about ambulance companies
and hospitals having to buy stronger gurneys and special lifting equipment to
handle the epidemic of obesity.

I feel a faint sense of being back home; I'm in the West. As we roll into La Junta, the conductor
announces this will be a 15 minute smoke stop. Cheers and applause erupt in the club car.
I muse to the couple next to me about the hypocrisy of tobacco being legal, and pot illegal
when one is an addictive killer and the other is not. "You ARE from California, aren't you?"
an older lady from Chicago observes. She wants to talk about Ah-nold. I'm still on
my first cup of coffee and don't much feel like dealing with that. She's going to Vegas
for the first time so I show her the pictures from Bartfest which are still on my laptop.

Sunday morning. Pacific Time zone. The sun emerges over the Southern California
Mountains. The train is running about an hour behind schedule-not bad for a 2300
mile trip. We will however pull into LA early; they allow two hours to cover the last
twenty-some-odd miles between Fullerton and LA. Right now we're actually passing
cars on the freeway which means we have to be moving eighty or ninety MPH.

I really want to be home now. My nose is bleeding from the dry air-conditioned
environment and my ears hurt from the altitude changes. The toilet flushing system in
the adjacent car is inoperative so there is a line for all the bathrooms. I want to sleep
in my own bed, hug my dog, drink a beer that doesn't cost $4.50 and get reacquainted
with the Internet.

Breakfast with a couple of SoCal natives. The very first topic of conversation is the
fact that absolutely everyone we encounter, as soon as they find out we are from
Culli-forn-yah, they want to know about Ah-nold. We discuss the perception that this
was a welling up of voter anger and the resultant statement. We agree that's media spin;
the real reason is to position CA to deliver the electoral votes to the GOP in '04.

I've learned a lot this trip, and had a chance to engage people form all over the country
in political discourse. Here's what I've learned: People aren't blind or stupid-they see
what's happening but feel powerless.  The money being poured into rebuilding Iraq is
a big bone of  contention.  Hey! We need schools and roads and bridges too!!

Nobody voted for Bush. Okay, I did meet one woman who admitted to it, but all
through dinner she kept apologizing. Everyone is interested in the CA recall. They see it
as quick fix. California is to be sure a trendsetter, but we need to be careful not  to let
our mistake become a trend.again.

Last leg of the trip, the 3 hour ride down the coast: I should be walking in my front door
about noon. It feels like I've been gone for months. I just noticed the woman sitting across
the aisle from me is reading "Dude Where's My Country?" I put down my copy of
"Lies and the Lying Liars Who Tell Them", and strike up a conversation.