Vote Crime - The Mugging of America

Move along, nothing to see here.

This ballot disaster was reported in the LA Times on March 9, 2004. As always, our
do-nothing media have not bothered to investigate or report on it since that date.

"In 21 precincts where the problem was most acute, there were more ballots cast than registered voters."

The article includes a chart of the names of precincts, the number of registered voters, the number
of votes cast and what percentage of turn out this represents. Here are just two typical precincts from
amongst the many listed:

Shh, dont tell anyone (although the Diebold and ES&S vote machine makers already know)
here is a recipe for using this type of "error" to commit an unprovable vote crime:

Select some precincts - maybe a precinct such as one in West Puritanville, SC. In the 2002 mid term
elections they had a turn out of several hundred with close to 100% Democratic voting. It is a poor working
class and minority residential neighborhood that has been hard hit by the ongoing Bush recession's exporting of textile jobs.

Pair up this precinct with another only a couple of miles distant, such as the white flight suburb of
Robertsgang Woods, the bedroom community for Bob Jones"University." Locals joked that anyone in this area
voting against George Bush was burnt at the stake as a heretic.

If you were a touch screen vote crook, youd steal ballots by setting the turn out in West Puritanville
at 9% and Robertsgang Woods precinct  at 290%, or vice versa depending on who you had chosen to win the
election. You could set these figures regardless of the number of actual votes cast. Keeping the proportions of
votes cast for each candidate unchanged in each precinct would smooth over such an obvious piece of white
collar crime. Dont worry - the law requires proof beyond a reasonable doubt for you to be convicted of
tampering with the election. That level of proof can never be reached.
Why?

Let me explain what they did in California when some precincts had more votes than people.

They looked at the result and said it was such a landslide that the error could not have affected the outcome.

It was not possible to recheck the votes by counting the paper print outs produced as each vote was cast
because there were none. These shell game ballot machines are made by the same companies who build
touch screen ATMs; modern marvels which faultlessly give you a receipt for every cent you deposit or withdraw.
The ATM and touch screen voting machines have the same basic design but use different software.
One other difference in the design is that no printer is attached to the ballot machine to record each transaction
for later auditing. No sane person would ever deposit money at an ATM if it didnt give a receipt.

So why should ballot casting and counting machines work to a lower standard than ATMs?

Perhaps because someone wants an unwatched back door to correct YOUR bad habit of voting
for the wrong candidate.....

The code to skim, cram, switch or simply lose votes is hidden in the software.  Without a paper record for
each vote cast being stored in a ballot box at each voting place, the true outcome of any election can
never be known. The winner is who ever the machines are programmed to chose.
Get over it.

Finding the software code for the tampering is impossible. It can be set to disappear when the polls
close or hidden deep in millions of lines of code in such a way that no amount of looking will locate it.
That presumes a court would even allow the code to be inspected.  The big players in the touch screen market
have refused to allow any inspection of their software on the bizarre grounds that it is a trade secret!

It isnt just Diebold involved in this horrendous assault on the American concept of fair voting,
however sinister the political donations of their corporate officers.  Another suspect group are ES&S
machines who are the  election guarantor for a certain Senator who includes H and C in their initials and
uses the company CEO as their campaign director. Since this is not a partisan issue, I will leave you to
suspect the worst about their identity regardless of your party leanings.

If someone refused to allow their bag to be search at the airport on the grounds that the contents were a
trade secret, the law courts would take a rather stern view. But when potential computer terrorists make a
similar claim, they are given a pass? Something smells rotten and I think it maybe be this cabal of voting
machine company owners. 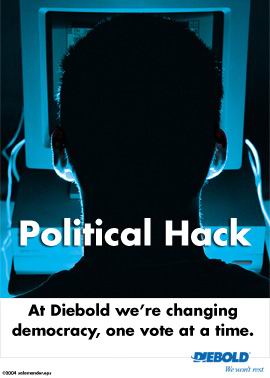 The stated reason no paper printers are provided is that adding them would be... too expensive!  For want
of a few dollars of technology no more sophisticated than a fax machine, I will never be sure my vote was
registered correctly in the totals. Diebold can count my deposits to the exact penny and prove it with a
thermal image on a paper slip but they but wont let me leave a paper print of my ballot in a sealed box as
a safe guard against machine failure; a miserable failure such as counting 2.9 votes for every eligible
voter in my precinct, for example. Perhaps we can pay for it by borrowing back some of the 87,000 million
dollars Iraq is supposed to be using to promote democracy.

Before the voters who support any particular group or party stop reading on the grounds that this problem
favors them*, let me explain why this is not a partisan issue.

There are primaries for each party and many are slated to be run on the touchnsteal equipment this spring.
Consider what this could mean if you support the wrong type of politician. Your candidate wont even get to
run in the final election for a place in the house or senate.  The machines can weed out politicians who are
not in lock step with the preferred policies of their manufacturers. The maverick house member, such as a
fiscal conservative with moderate social policies, is an endangered species.

If you are patriotic enough to care about issues that affect our nation, if you ever feel moved to write to
the editor or to your representatives, or if you are motivated to give money to a political cause, then you
should care about the stealing of America. Your lobbying as a citizen hinges on one premise,
Politicians listen to me because I shall vote for the candidate who best represents my views.

Without vote crime reform, you have no voice. As long as vote skimming goes on unchecked, your vote
means nothing. Your fervent and logical voice for or against any issue is wasted unless it can be heard at
our polling stations and that is why I ask you to:

Call, email, snail mail or fax both of your senators to sign on as co-sponsors of S.1980, the bill to
require paper trails on electronic voting machines. Go here to find Senate contact  information:
http://www.senate.gov/general/contact_information/senators_cfm.cfm

Call your Representative and ask them to sign on as co-sponsors of The Voter Confidence and Increased
Accessibility Act of 2003 (HR 2239).  Go here to find House  contact information:
http://www.house.gov/house/MemberWWW.html

________________________
* Wally ODell is the CEO of Diebold, one of the largest vote casting and counting machine
manufacturers. He stated that he would do anything he could to get a certain candidate elected in 2004.
It doesnt matter who that candidate is or what party they represent - without restraint over vote crimes,
your preferred official maybe the next victim of this scam.